Paradox Interactive’s has announced a new game at the Paradox Convention Press Conference. Its called A Game of Dwarves and it remind me of games like Dwarf Fortress, Dwarfs!? and the actual art style reminds me a bit of Magicka.

A Game of Dwarves?

From paradoxplaza.com: “A dwarven prince on a quest to reclaim his people’s old country takes the player on a journey through a continent, uncovering the buried mysteries of the Great War. With a combination of strategy and management, the player rules their settlements of dwarves, having them explore the earth and utilize its resources.” 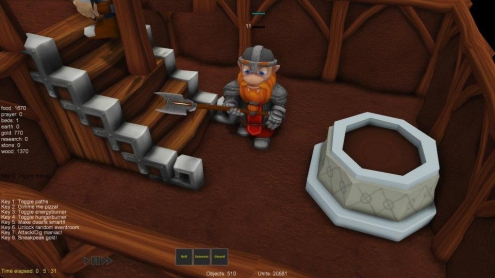 “The gameplay consists of ordering the inhabitants of a dwarven settlement to dig, build and conduct research in order to strengthen the clan, whilst defending themselves from the terrible beasts from the depths into which they delve. The game generates a unique world each time a new level starts, making sure that the player needs to dynamically adapt their strategies and tactics during a session.”

“As the player advances, the dwarves will level up and gain new skills, progressing from weak dwarflings to near immortal warriors or master craftsmen. There are also rare resources to be found deeper in the earth that grant access to better buildings and equipment. However, the deeper you dig the more dangerous foes you might unleash.”

The game has no release date at the moment but it will be available for PC and PlayStation 3.

One thought on “Paradox Interactive Announce A Game of Dwarves. Also Five Screenshots”