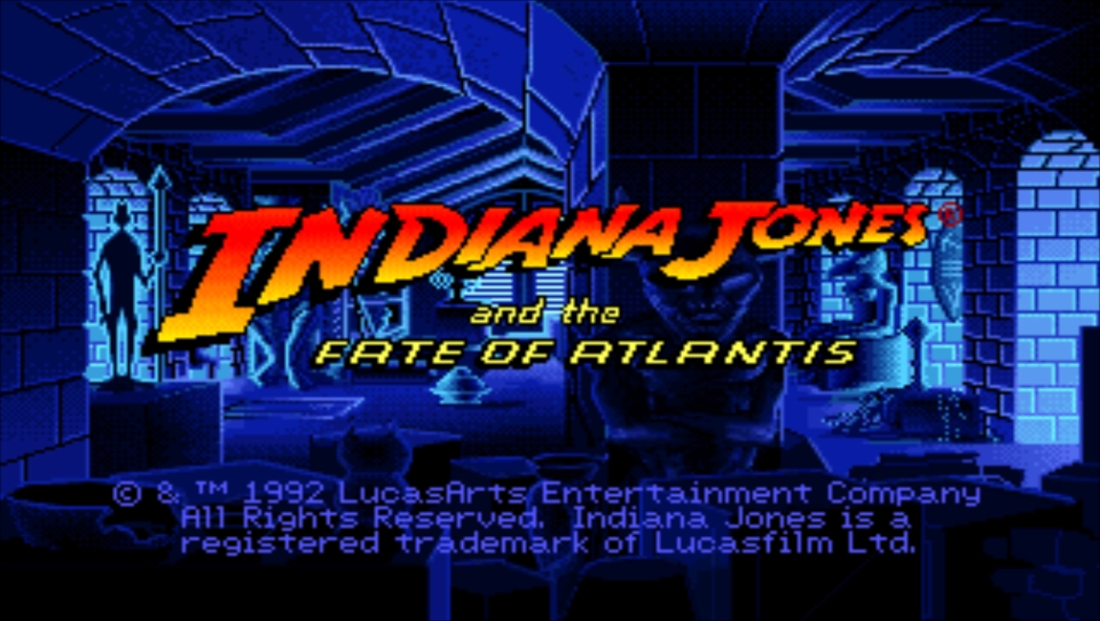 Today its Indiana Jones and the Fate of Atlantis a 1992 point-and-click adventure game developed and published by LucasArts for MS-DOS (DOS). It is the seventh game to use the SCUMM game engine.

In 1993 it was reissued on CD-ROM as an enhanced “talkie” edition with full voice acting and digitised sound effects. In 2009, this version was also released as an unlockable extra of the Wii action game Indiana Jones and the Staff of Kings, and as a digitally distributed Steam title. In Fate of Atlantis the player explore environments and interact with objects and characters by using commands constructed with predetermined verbs. It features three unique paths to select, influencing story development, gameplay and puzzles. The game used an updated SCUMM engine and required a 286-based PC, although it still runs as a real-mode DOS application. The CD talkie version required EMS memory enabled to load the voice data.

The plot is set in the fictional Indiana Jones universe and revolves around the eponymous protagonist’s global search for the legendary sunken city of Atlantis. Sophia Hapgood, an old co-worker of Indiana Jones who gave up her archaeological career to become a psychic, supports him along the journey. The two partners are pursued by the Nazis who seek to use the power of Atlantis for warfare, and serve as the adventure’s antagonists.

The story was written by Hal Barwood and Noah Falstein, the game’s designers, who had rejected the original plan to base it on an unused movie script. They came up with the final concept while researching real-world sources for a suitable plot device.

Fate of Atlantis was praised by critics and received several awards for best adventure game of the year. It became a million-unit seller and is widely regarded as a classic of its genre today. Two concepts for a supposed sequel were conceived, but both projects were eventually cancelled due to unforeseen problems during development. They were later reworked into two separate Dark Horse Comics series by Lee Marrs and Elaine Lee, respectively.

Watch the video I made below showing about the first 25 minutes of the game.

Indiana Jones and the Fate of Atlantis Gameplay.

One thought on “Good Game: Indiana Jones and the Fate of Atlantis (DOS)”