Sega has announced that the next Total War game from Creative Assembly, Total War: Rome II will be released on 3rd September worldwide. If you pre-order the game before its released you will get the first DLC pack for free. The DLC is called The Greek States Culture Pack and includes three new factions: Athens, Epirus, and Sparta, which can be used in all game modes. All three factions will contain unique units, buildings and much more. 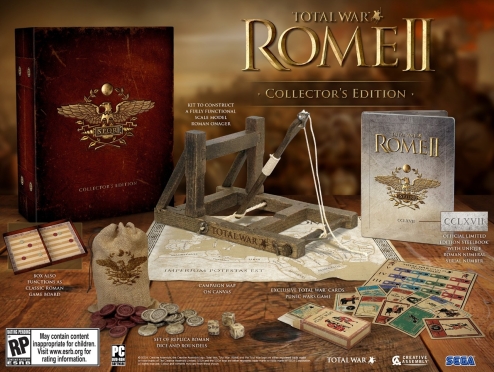 There is also a collectors edition coming out which is limited to twenty-two thousand units and contains the following:

The collectors edition does look pretty tempting but it does also cost about £109.99 so that’s more than double the normal edition but some of the things included look good and at least it’s not some statute or figurine that always seems to be included with these collectors editions normally. You can also use the Onager to hit your friends with small projectiles.