From Wikipedia “Megaupload is an online Hong Kong–based company established in 2005 that ran a number of online services related to file storage and viewing. The domain names were seized and the sites shut down by the U.S. Justice Department on 19th January 2012, following their indictment and arrests of the owners for allegedly operating as an organisation dedicated to copyright infringement.”

Read more for more Megaupload fun, my opinions and the Mega Song video.

The Megaupload site is now adorned with a suiting and fashionable joint FBI, DoJ, and NIPRCC notice of federal crime charges. How dashing! 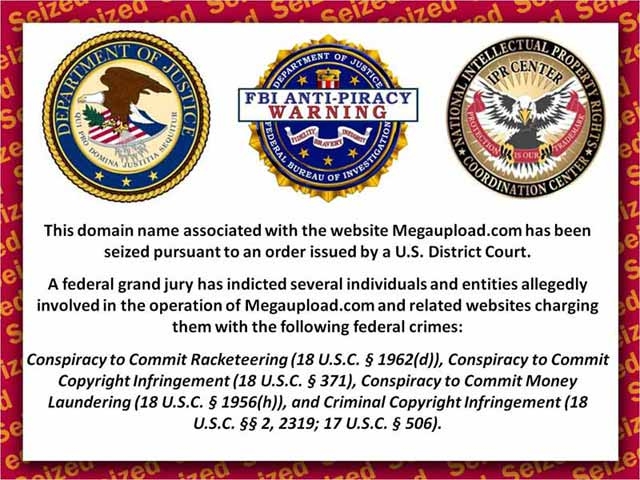 Theres plenty of sites like Megaupload on the internet and they all basically work on the same basis. They offer an online file storage service. For free you can download normally around one file at a time. This normally also involves no parallel downloads, size limites, waiting to download and pitiful download speeds. However most if not all offer memberships so you can pay something like $5 a month to get faster download speeds and much more.

The main problem with these sites is that sure some people use them legitimately to store their legal files but a lot use these sites to store, game iso files, mp3 files and movies. Most of the time there hard to find on the file storage sites themselves but plenty of other sites link to them. For example go to some game site that offer free game downloads and they wont host the file on their own site but provide a link to a site like Megaupload where you can then download the file at whatever speed your membership allows (if you have one).

All this leads to is sites that have lists and links to file sharing sites that in turn are hosting these illegal files. So sites like Megaupload are making money whether they know it or not on the back of developers, musicians, film directors and many more.

Of course Megaupload would attempt to take these files from their site if they become ‘aware’ of them but these illegal files is one of the reason these sites are so popular and why piracy is so rampant on the internet. The whole piracy issue is of course complicated but many people claim that they use these sites to make back up of their games etc which is in most cases isn’t true. It is also hard to prove otherwise.

The musicians that should be ashamed

The following have made have a fool out of themselves by appearing in the Megaupload video “The Mega Song”:

Here is the video against humanity. Watch it and laugh.

The music video was also uploaded to YouTube, but was removed following a takedown request by the record company Universal Music Group (UMG). Megaupload said that the video contained no infringing content, commenting: “we have signed agreements with every featured artist for this campaign”.Megaupload requested an apology from UMG, and filed a lawsuit against the company in the United States District Court for the Northern District of California, on 12th December 2011.

UMG denied that the takedown was ordered under the terms of the Digital Millennium Copyright Act, and said that the takedown was “pursuant to the UMG-YouTube agreement,” which gives UMG ” the right to block or remove user-posted videos through YouTube’s CMS (Content Management System) based on a number of contractually specified criteria.”

The video was subsequently returned to YouTube, with the reasons for the UMG takedown remaining unclear. YouTube stated: “Our partners do not have the right to take down videos from YT unless they own the rights to them or they are live performances controlled through exclusive agreements with their artists, which is why we reinstated it.”

Lawyers for will.i.am initially claimed that he had never agreed to the project, but on 12th December, he denied any involvement in the takedown notice.”

Now lets forget that video was ever made.

Someone mentioned on YouTube in response to the Megaupload Mega Song:

My response to that comment would be this: Your support for SOPA is blinding you to the obviously reality of the situation. SOPA seems bad in principle but Megaupload coming down has nothing to do with it. Look at Napster that when down years ago before coming back again as a legal business before any talk about things like SOPA and PIPA. Also destroying the FBI? get a grip. I’m going to assume you are either a child or a teenager and one of those people who didn’t pay for your games, music or films. I assume that because if you are upset that Megaupload is closed down that much then you have obviously not seen the hundreds of other similar sites and other storage solutions such as cloud storage which are available.

Bring on the storm, children.

8 thoughts on “My Opinions on the Megaupload issue. The New Picture Adorning Megaupload and the Musicians that should be Ashamed”